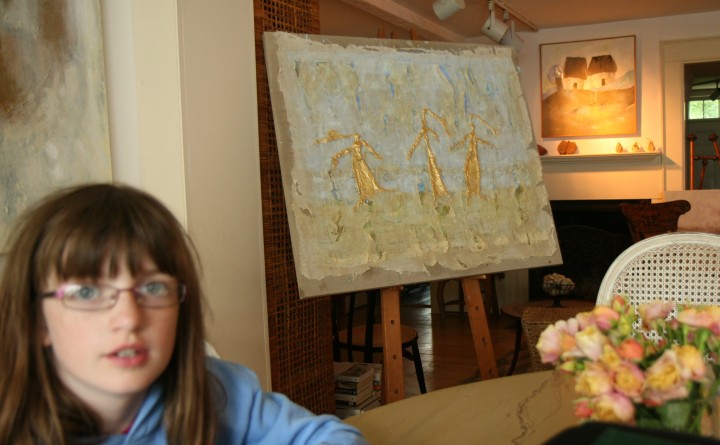 Yesterday we began the long journey home from the Cape. Traffic was very heavy. I took the old highway 6A most of the way  so that we would have something to look at as we sat in traffic. I also wanted to drive through Sandwich, the home town of an old friend, and got more than I bargained for. We were in Sandwich for hours. It is possible to go so slowly through a town that you see only the bumpers of the cars just ahead. We were behind a bumper sticker for two hours that read, “Real men don’t ask directions.”

Midday we stopped to see JoAnn Hughes and her husband Charlie Weiner for lunch and to have a look in JoAnn’s studio. It was the real focus of our day. Outside the rain was coming down hard as we sat around the big table with cabbage soup, a simple salad and then lemon sorbet. JoAnn began by sharing with us the painting of three women figures in gold and explained to the girls very gently the old idea of the three women each at a different stage of life. Elisa nodded at the word hag recognizing it from fairy tales as the old witch.

JoAnn discovered the Hag in Ireland when she went back a few years ago to figure out this business of aging. She has a quiet strength and as Brendan recently said, and I think he is right, she is “tapping into something deeper”.  One of her images of the Hag with white sheep wool for hair is so similar to her own, it makes me smile to see so clearly the woman and her art becoming the embodiment of each other. The Hag is an ageless woman. She has the power to be the voice for those that have no voice.

Her own mother is depicted too, simply hanging laundry, her dreams of playing violin never realized, her potential never fulfilled. JoAnn, as a daughter too, is carried still by an image of her aging mother folding a large sheet. The rhythmic chores of everyday life become the images that sustain us through times of hardship.  After all, the little things, like folding laundry that has been brought in from the line, are women’s wisdom and really may be what matters most.

4 thoughts on “rain, food, and stories of the Hag”