We milked a Jersey cow named Eloise and though she has some very good qualities, she was also a pain in the neck (am I allowed to say that?). Eloise had knack for slapping me in the face with her tail just as I was beginning to relax into the rhythm of milking, she made a habit of stepping a dirty hoof in the bucket of warm milk, and she was a violent  kicker. We put up with a lot and though I’m sure she brought me to tears at least once (tail slapping hurts, a lot), I didn’t hold it against her. Jersey cows do have a reputation for being difficult. Their cream is so good, but boy oh boy. Having milk, I loved but I can’t say I loved milking. We sent her to stay at my brother-in-law’s dairy barn thinking that a being around more cows might make her happier and therefore more settled and then the next time she came fresh we left her on pasture and bought a couple more calves for her to raised up -she had too much milk for just one calf. Eloise’s other good quality was that she was a very good mother to her own and her adopted calves. There was no milk left for us but it was fine that way.  Really and truly.

And now we have Penny. Billy works at a Jersey auction a couple of times a year, as the night watchman and midnight calf deliverer. The cows come in all week and then are auctioned off on Saturday, mostly going to other dairy farmers.  It is where we bought Eloise  and then later also sold a nice heifer who now lives on a farm in Iowa.  Penny is eight years old which is old for a cow and and coming to our farm after a life time of the same routine must have been shocking. When Billy walked her off the trailer here and put her in the pasture that first morning we quickly realized that she had never seen fresh grass and didn’t understand that it was edible, had probably not spent any time outdoors, and had certainly never seen sheep. The first day  she was a nervous wreck. By the second day or maybe the third she began to graze and everyday it was  less of a struggle to get her to walk to the barn. Every time she saw something new, she stopped and looked for a long time before we could convince her it was safe to move forward. Tonight, after about two weeks, she met me at the gate  and walked to the barn by herself (woot).  She is used to the sheep, used to the chickens (even the rooster’s crowing this morning didn’t cause her to jump) and is no longer alarmed by the pumpkins sitting on the front  porch. And now I have to gush. She may be the sweetest cow on the planet. Not once has she kick me or the bucket, I’ve seen her carefully avoid manure when she walks or sits down (amazing!), and she  actually seems to move her back legs out-of-the-way to make milking easier. Oh my goodness I love this cow.

Milking is a wordless activity. During these past two weeks I’m being trained to a new routine just as much as she is. There was the hard work during the summer, for  Billy to grow the food she needs during the winter and now it is  hard work for our hands and arms.  But for a few minutes twice a day,  she eats quietly in the barn and I sit on a stool and fill a bucket with eyes closed, resting my forehead or cheek on her warm side. It works. 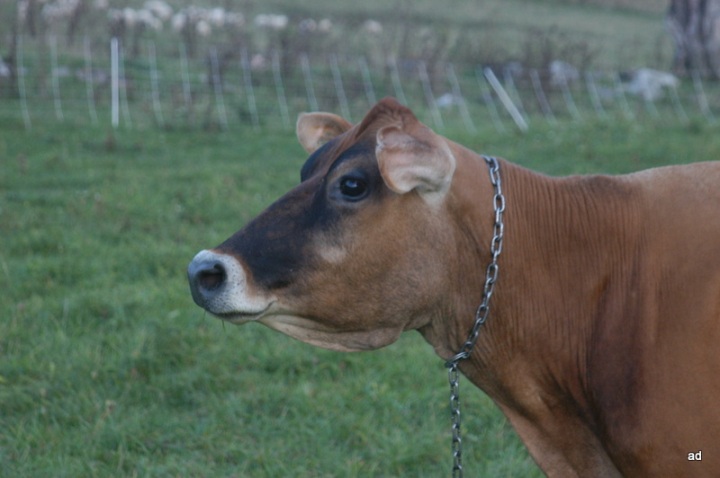 2 thoughts on “creatures of habit”