Writing here is happening in part because the cold arrived and it woke me up, also because PipSqueak is pregnant and had her milk drop off as it should- she’s taking a break before she calves again so I’m not in the barn right now, and because the girls are out tonight at a big high school football game. They  ate quickly, put on warm clothes, and left in a flurry.

To get back to the dogs 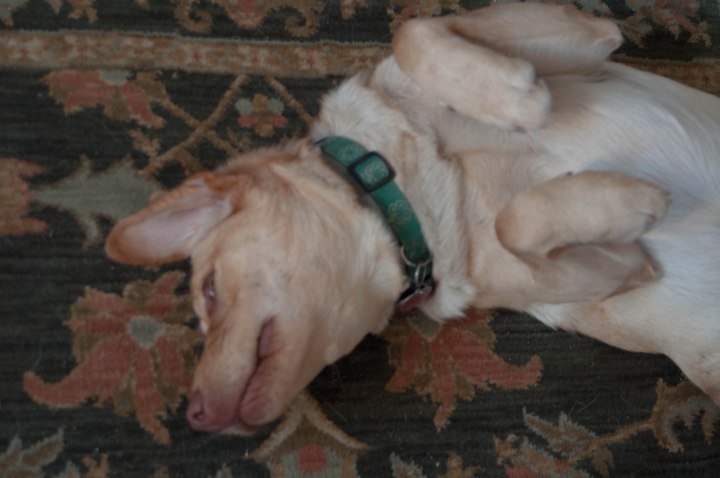 I had the untested theory that two dogs were better than one. Marta is still a puppy herself and she may not even remember life before Jamie. She is a  harder for the passerby to love though the traits are recognizable to all the lab owners out there. I often apologize and explain that she’s a puppy and I hear, “Oh, she’ll  calm down, when she’s twelve.”  Marta gets really happy to see anyone and in her excitement her heavy tails swings wildly. We have to leave her tied up on a dog run that stops short of the road because her excitement to greet also extends to vehicles. It is pure love and it can be intense. When my baby nephew Louie visited this summer he stood at her gate where she panted wildly because he was so close but just out of reach and he in turn squealed with delight. Louie couldn’t get enough of her and Marta let him climb all over her and pull her fur in his fists. The good thing about Marta is she is patient, has never given me an ounce of trouble  with  housebreaking and has been steadily happy since the day she was born. Jamie arrived during the peak of her teen awkwardness and he was the cute fuzzy darling. Everybody loves him. He is mellow and friendly except when he is trying to take a nap, he doesn’t like to be bothered. He is also very casual about the whole house- breaking thing which continues to renew my appreciation of sweet Marta. Jamie is my shadow so I catch him in the act of peeing in the house every time and when I scold him he takes his time to look up and says with puppy eyes, “But I had to go.”  Clearly being a guard dog  is in his nature the way that running like a colt to bring things back to me is in Marta’s nature. When I take them out for a run up on top of the hill  he sits by my side and we watch her run. Finally, I have him sleeping through the night, most nights, and sleeping downstairs with Marta. They are becoming a pair. He calms her down and she brings out his playful side. Marta seems to be settling now  though being spayed not too long ago may be part of it. When they are both banned to the outdoors which happens just as soon as Jamie has a drink, they  sit together on the porch, side by side looking out on the yard where the chickens wander.

On Tuesday Jamie had the last in a long series of vet appointments and was declared healthy. We don’t have to go back for a year. He weighs 26 pounds which is a far cry from the 3 pounds in August. Our vet, who also happens to be named James  looks very stern until he sees Jamie and then he smiles in a way that makes his eyes crinkle, said Jamie is in perfect form.

The pictures are of them sleeping or in Marta’s case, thinking about sleeping, because normally when they see my camera they want to be in my lap licking the lens.

4 thoughts on “the official puppy update”